I tried an experiment this past fall and I must admit I felt I was gambling a bit with my bees and did not want to share if the experiment went bad. I had what appeared to be 11 healthy hives going into winter with 1 a bit low in population however it acted the same last year so I was not too concerned. Out of the 12, 3 were new to the yard and 2 simply felt a bit light. The 7 others seemed to have some weight so I was confident there was enough honey in them to make it through winter.
The new hives were going to take some work in order to get ready for winter. I needed to build up the five: a swarm that I captured late in the season, a cut out from an old farmhouse and a small split from a frame of eggs and a few bees. Another was a hive that I got as a swarm 2 years ago and a veteran Russian Carniolan mix. Since 3 of hives were on new frames I frantically had to feed to get a good supply of honey built up for winter stores.
The year before I purchased a commercial mite treatment that contained thymol so I thought perhaps if I made a strong tea from thyme and mixed it in with sugar syrup it may have a similar effect. The bees seemed to be indifferent to the strong thyme taste. I was curious and tried it myself as a tea with a bit of honey; it was very acrid and not very palatable as a tea. I made the tea in a French press and used about 1 oz of thyme to about 8 oz of water, steeping for a good 5 mins. I added this to about a 1.5+ to 1 ratio of sugar to water in a total volume of about 1 gallon. I was not being too scientific just trying to get as much sugar as I could to dissolve into fairly hot water. Each hive was taking about a quart of syrup a day and I fed for about 3 weeks before the first frost. All in all across the 5 I fed about 150lbs of sugar. I also made and added bee candy to the 12 hives. I did not treat the 7 with anything as they seemed to have a good strong population.
The 7 lost hives starved as it was apparent the cluster did not move to fresh honey stores. Genetics could be part of it as the surviving stock is definitely a mix of different bees. The survivors are dark with a majority looking mostly Russian but they are a mix of colors across the spectrum from total black, some brown like Carniolan to ones with top half of the abdomen a bright yellow gradually getting darker with black tails. Is this a genetic amalgam from bees in the yard or just a well mated queen? Of the 7 lost, the week one or the one low in population was the 2 year old Italian, 4 were Carniolan, 1 a 2 year old swarm and the other a was a Russian Italian mix.
When I opened the dead hives there was plenty of available honey and clusters of dead bees between the frames. When I looked closely I found that I did see many dead mites along with the dead bees.
I am not entirely convinced that my experiment proves anything except that I did not kill bees with simply adding the thyme brew to the sugar syrup and mite control is essential for overwintering bees. 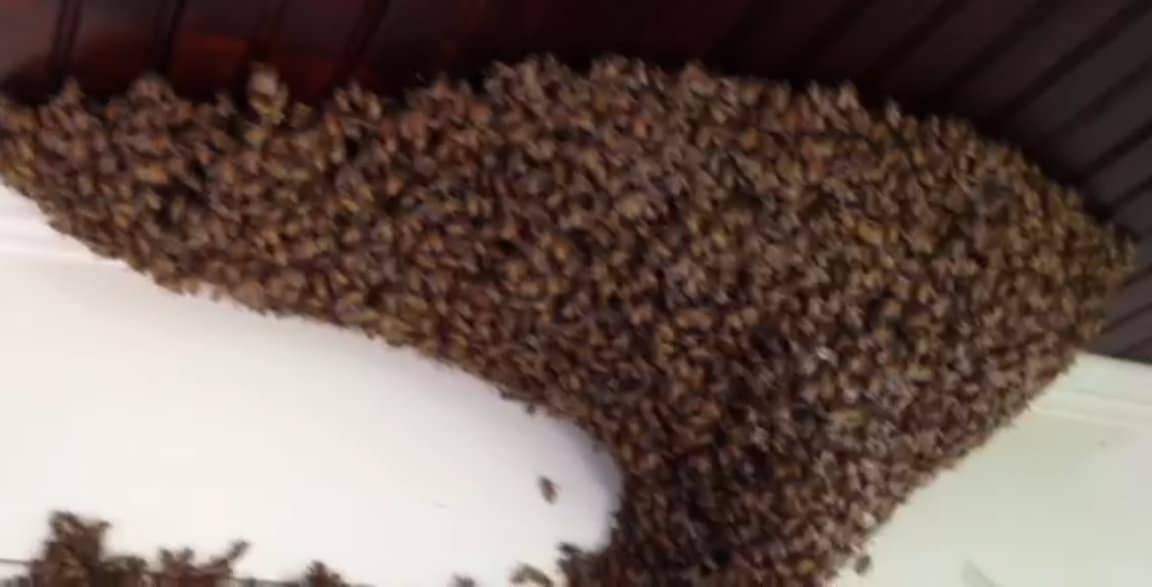 The call came in at 8:16 while I was getting ready for work. A gentleman by the name of John called me and he had a swarm on his front porch. Anyone can create a welcoming garden for pollinators. Turning your own yard or other property such as a schoolyard, work landscape, or roadside green space into a pollinator habitat is fun, easy and can make a difference for birds also. Planting a few flowers for your honey bees is like adding a few gallons of water to the ocean. Honeybees need on average about a square mile of good cover to forage on. However, adding a diverse mix of flowering plants to your garden will also attract butterflies, moths, hummingbirds, along with native bee species and the occasional wasps. These insects are essential to our survival and need to be welcomed into at the least a corner of our backyards.  Besides providing a food source for pollinators flowers provide cover for other wildlife such as birds and also reduce neighborhood mowing area. My bees are alive at least some of them! Difficult to tell if others have made it. I ran out of battery while filming I was successful in porting the solar inverter data to MRTG! This is accomplished with a program called RRDTool developed by the […]